WE HAVE KITTENS AVAILABLE FOR RESERVATION NOW 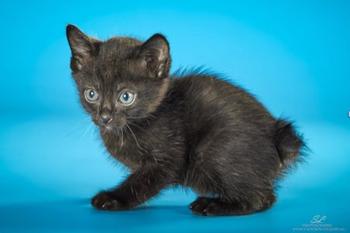 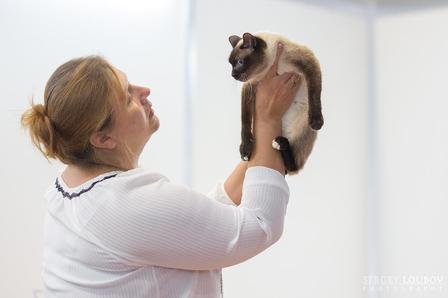 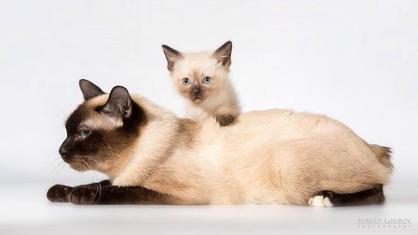 Check out our beautiful magazine about the breed!

Picture by the curtesy of Dr. Anna Gromova DVM

Summary Background:
The Toybob is a breed of small and compact cats with short kinked tails that were first documented in Russia in the late 1980’s. The Toybob is often considered to be “the smallest breed of cat” with a bobbed tail -both due to a spontaneous mutation(s). Over the past few decades, breeders have been growing the Toybob gene pool, while starting performing research on their genetic mutations. Recently, Toybobs have experienced global growth in breeding programs and were introduced into championship status In Russia as early as 2015.

Initial Records:
E. Krasnichenko documented the first Toybob’s back in 1988 when she bred two stray cats she found outside her home in the Rostov region of Russia. By her accounts, these two cats looked very much like seal-point Siamese cats, except both had kinked bobbed tails. The breeding of these two cats produced an unusually small cat she named “Kutciy,” which became the foundation cat to her line of Toybobs she first called “Skif-Thai-Don.” To this very day, Krasnichenko’s cattery only breeds her Rostov Toybobs in the same seal-point color as the first two cats she found. However,  the mutation first recorded with Kutciy its carried on in other colors (coat lengths) and is not strictly associated only with the seal-point color pattern.

Breed Development:
In the late 1990’s, breeders from the Ural regions in Russia,:  Alexis Abramchuk (Si-Savat cattery), and later Natalya Fedyaeva (Little Angel cattery) both local breeder expended the breed starting with couple littermates acquired from the Rostov Kutsiy- Skif-Thai-Don lines. Fedyaeva also observed that cats of very similar phenotype to the Toybob were being spotted living locally around barns and streets in her region and the neighboring Sverdlovsk region. These native cats were also of small size with kinked tails or kinked bobbed tails, but seen in colors and patterns other than seal-point. To Fedyaeva, these petite felines did not only appear to be of the same Toybob phenotype, but proved to be robust due to the harsh environment they were surviving in. Fedyaeva, then selectively bred the Skif-Thai-Dons to the similarly diminutive stray cats from her area. Other Ural based breeders began to work with the small sized cats, adding to the breed’s early development the Thai and Mekong cats. These two breeds were also similar phenotype and used to increase the Toybob’s genetic pool, thus establishing great health and overall hardiness.

First Preliminary Standard:
In early 2000’s, the Ural breeders began promoting the Toybob under the general name as it was suggested by dr. Olga Mironova in 1994.  The first club to acknowledge Toybobs was a club registered with the WCF (World Cat Federation). The club name was "Prosto Koshky" (Simply Cats) and its leader Irina Matyushina is a WCF expert to this day. In 2009, the first preliminary standard for the breed was drawn and breed codes given, TBS for short-hair Toybobs and TBL for the long-hair. During this time, several of the Ural breeders were beginning to call their cats “Scyth-Toybob” in order to specifically refer to the Ural bred Toybob cats that came in all colors and divisions. The name Scyth Toybob and Skiff Thai Don contributed to development of the Toybob breed as we know it today.

While Scyth Toybobs are very hardy and healthy breed, the Skiff Thai Don cats dependent their survival on the crossing with the Ural native cats. The Skiff- Thai- Don cats (line formed in Kutc cattery) came only from two foundations cats that were interchangeably bred for over 9 generations now, to their very close relatives as mother /father, siblings and grandparents, great grandparents, etc... providing very high risk to fertility issues and vast pallet of other close genetics health issues, reaching the inbreeding coefficient as high as 122%, while most cat fancy associations advise to keep the genetic pool lover than 25% of overall inbreeding.

The Toybob's genetic pool now has extended to many lines as well as development of other colors that are going to be very popular for this breed as the pointed version is nowdays.

Experimental TICA Application And Preliminary DNA Testing:
In 2004, Toybobs from Fedyaeva’s Little Angel Cattery were imported to the United States, and four years later the imported cats were registered in the “Experimental” category with The International Cat Association (TICA). The (TICA) application filed entered the newly Experimental cats under the general breed name Toybob, allowing all colors, as the continuity of the Ural based breeders vision of the breed. At the time little to no genetic research had been done on the breed in order to learn more about the unique genes behind the Toybob’s small size and kinked tail appearance. Recently, geneticist Dr. Leslie A. Lyons performed preliminary testing for any connection to Manx breed that carries gene pertaining to tailless cats and the testing resulted in no direct connection to the known bob tail mutations while giving us a further room to discovery of the new mutation (s).

Toybob Breed Accepted Into Championship Status By Other Professional Organizations:
In 2013, the Ural Toybob breeders registered the breed with the Russian feline registry ICU (International Cat Union) and “UFC Belton” in Yekaterinburg. This was the first ICU club to begin working with the breed and in 2014 the Ural breeders officially added the prefix Scyth to the Toybob name to differentiate their cats from those bred in the Rostov region. Also in 2014, breeder Dr. Anna Gromova, DVM and a team of her associates, applied to MFA (the largest Russian cat registry) with a request for recognition of this young native breed). In May of 2015, at an International Feline Association conference, MFA accepted the breed into “Championship” status and as early as October 2015, the Scyth Toybob received its first championship titles. In November of that same year, the breed was given recognition to Championship status in ICU and the first titles were earned in January 2016! Since the cooperation of all breeder worldwide the breed is working to unify all standards for the cats and registered under the general name TOYBOB.

Toybob Breed Growing Worldwide Popularity And Genetic Research Continues:
At the present time there is still work underway with Toybobs. Recently, breeders have been working on performing more research on the “Toybob” genes and its mutation(s), with the cooperation of Dr. Lyons. In order to ensure great health and proper genetic diversity, the  Toybob will continue to use native domestic cats of similar phenotype from the Ural region, to continue expending the breed genetics and other colors that are gaining vast interest worldwide.  Under the leadership of Dr. Anna Gromova, DVM, there are currently Toybob breeding programs all over Russia, the United States, France, Spain, Sweden, Japan, Denmark, UK, and Canada. It's worth saying that the breed is bound to be successful as there is a great deal of interest in it and it attracts lots of attention from pet owners and cat show exhibitions. — Who could resist these cute little felines with their affectionate and cuddly personalities?